The Reasons Why Are German Shepherds Used in The Military?

by admin
in Dog Health

The likes of war and tactical missions call for sensitive work. It is the reason why military dogs are supposed to fulfill high expectations. They need to be strong, and their athletic abilities must be commendable.

They need to be highly trainable and intelligent as well. Apart from that, service dogs must adapt to diverse working and living conditions.

Considering all the requirements we have pointed out, it should not come as a surprise that German Shepherd dogs are among the most preferred dog breeds for the military.

When it comes to dog breeds used in military units all around the world, German Shepherds are one of the most popular, and this is because they have the finest combination of the following traits:

German Shepherd Dogs in the Military:

German Shepherds are loyal and obedient

German Shepherds may not be the most playful and friendliest dog breeds, but they are one of the most loyal canine breeds. They may be aloof to people they do not know, but they form deep bonds with their handlers – one that lasts their lifetime.

They are so loyal that you would never be able to sway them to the other side in a fight. They would not hesitate to endanger their life and well-being to protect their handlers.

German Shepherds are courageous and confident

German Shepherds are as brave as it gets, and they are immensely confident in performing their duties no matter how challenging the environment outside gets.

It is courage that makes them such a suitable option for various roles in the military and helps them work with such efficiently, no matter how chaotic it gets.

German Shepherds are intelligent and alert

German Shepherds are said to be among the most intelligent dog breeds in the world. They are fast learners and trained to do elite military work. Apart from that, they have a strong ethic, and their eagerness to please their handlers is insatiable.

German Shepherds have the size and strength needed to do what can be termed vigorous work for dogs. They also have unbelievable energy, speed, and endurance. 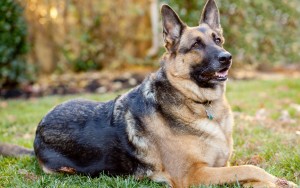 German Shepherds are great at work

As we have said, German Shepherds have great work ethics and are highly trainable too. However, they are reputable for natural abilities that make them perfect options for military work. The most important ones are their protective nature, heightened sense of smell, and ability to focus.

German Shepherds are great at adapting to all kinds of working and living conditions. They will do well in all places if they get mental stimulation and physical activities. To them, it does not matter if it is cold or warm, chaotic or calm, and spacious and tight.

The type of work that German Shepherds do in the military

German Shepherds are known to be all-purpose workers, and you can generally train them to do any work. The most popular roles that they fulfill in the armed forces are as follows:

As patrolling dogs, they are supposed to guard property or spaces. In this role, they usually assist their handlers in preventing various crimes.

In military operations, such as wars, they guard against intruders on bases and camps. German Shepherds are great at performing such tasks because they are highly protective by nature and always alert to the changes in their environment.

The role of attack dogs is pretty similar to sentry or patrol dogs. They also protect property from entities that are not wanted over there. However, in this case, they also receive extra training so that they can engage intruders if the need be.

In the field, they can help with apprehension as well. Once again, the protective nature of German Shepherds helps them to perform such a job as well as they do. It also helps that they are so confident in attacking.

Tracking dogs are scent dogs. They get trained to use their sniffing abilities to recognize and detect certain scents. It is expected that they would follow the scent trail to take their handlers to the subject in question. Therefore, German Shepherd dogs are used to such an extent to find fugitives.

Dogs for detecting explosives are a specialized form of tracking dogs. In this context, they receive training on detecting traces of vapors emerging from chemicals commonly used for making explosives. In the military, they are often used to sniff out landmines and bombs.

As search and rescue dogs, they are used to look for survivors in natural disasters, attacks, and catastrophes of a similar magnitude. So they can do such work successfully.

These dogs are trained to track a scent and other tasks, such as staying alert to minute vibrations and sounds. The highly specialized dogs get trained in parachuting and rappelling. It becomes necessary in rescue and search tasks.

Read Also: How to Raise a German Shepherd in a Modern Setting

So, as you have seen already, German Shepherds have all the abilities and traits that dogs need to work in the military. Hence, members of the breed are among the most frequent recipients of the prestigious K-9 Medal of Courage.

These dogs bring their physical strength, intelligence, and temperament to work, which makes them the most versatile dog breed. Even apart from that, these dogs are admired and adored beyond work. You must understand how they form bonds with their handlers.

Apart from the work they do in the military, German Shepherd dogs are known for their agility and fearlessness as service dogs and police dogs.

They are great as family companions too.

A new point of view on aging in people and dogs

A new point of view on aging in people and dogs

Why are dachshunds so needy? How to fix it

How to stay positive and healthy

Violence On Camera: Seven People Booked for Beating a Stray Dog in Mohali

5 Warning Symptoms Of Dementia In Dogs